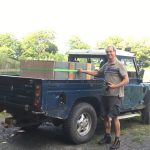 Some people dream of building a ‘Grand Design’ using ‘Leading Edge Eco materials’, but what they forget is that just beyond the leading edge lies a vast abyss of ignorance. The day you find yourself staring into it, you might just have to hope that an unexpected hero will suddenly emerge to save the day. Luckily for us, Chris Brookman and his products from Back to Earth appeared just in time.

But first,  the good news

It is probably lucky that I had no idea at what stage we would need to install in our underfloor heating.  I started talking to Chris Brookman of Back to Earth about it while the foundations were going in, a full two years ago. Roderick James Architects had specified his super efficient Lithotherm underfloor heating system for Easterdown, consisting of interlocking tiles that replace a floor screed and that we would be laying ourselves.

Chris had been a builder AND has built his own beautiful Passiv haus, so, unlike most importers of building materials, he completely understands what goes into every aspect of building a house, he really knows his materials and how they fit into an entire house build.

Indeed, within the space of one week, working only one full day, the weekend and a few evenings we laid our all of Lithotherm floor tiles:

Landrover starts to earn its keep – By collecting 1 tonne of tiles at a time we saved the delivery charge, plus we could get ONLY the precise amount of tiles we needed. No leftovers and NO WASTE! 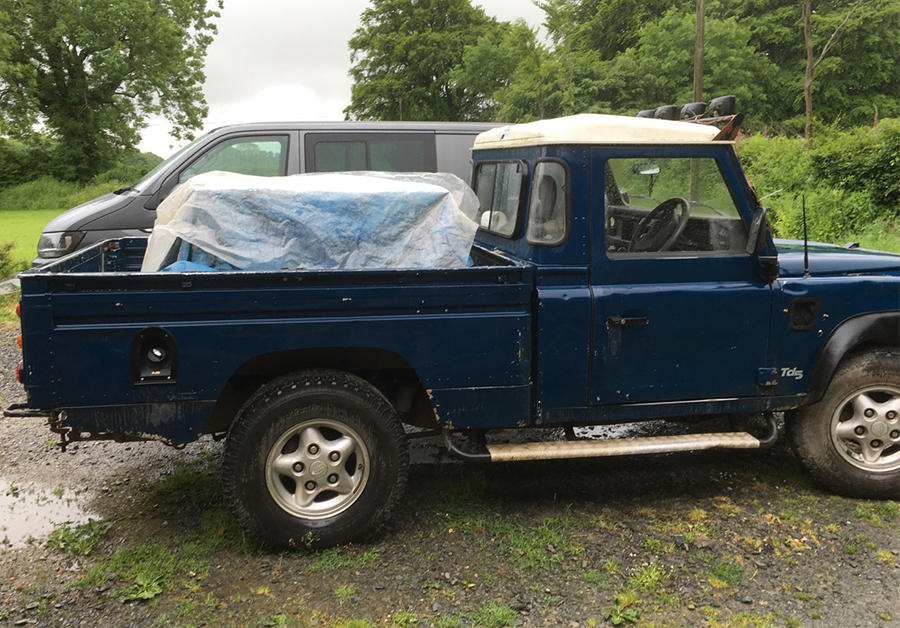 The vapour barrier membrane over the insulation: 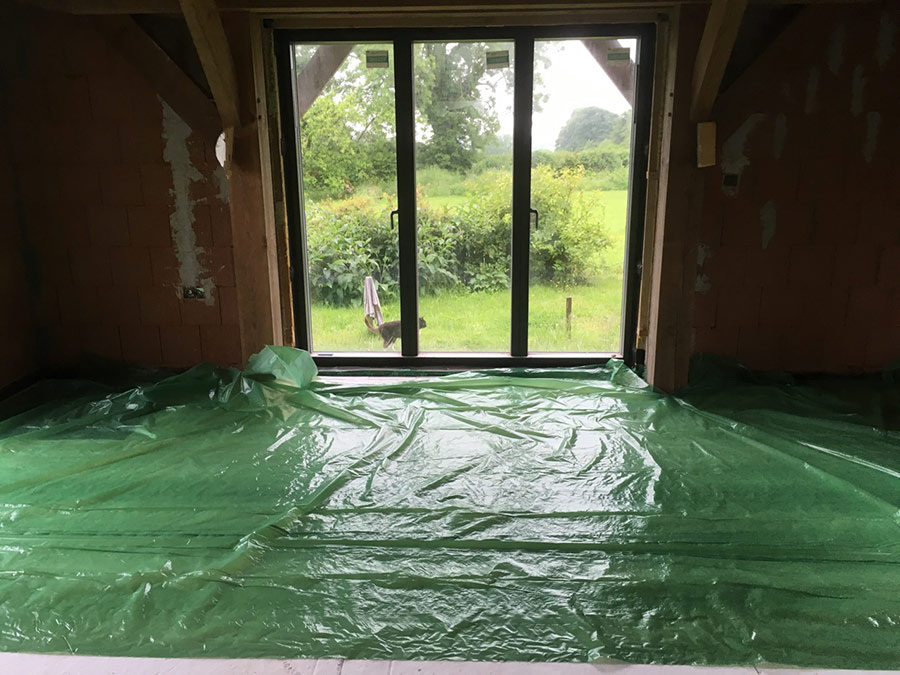 Mike Roberts working out the method for/with us. 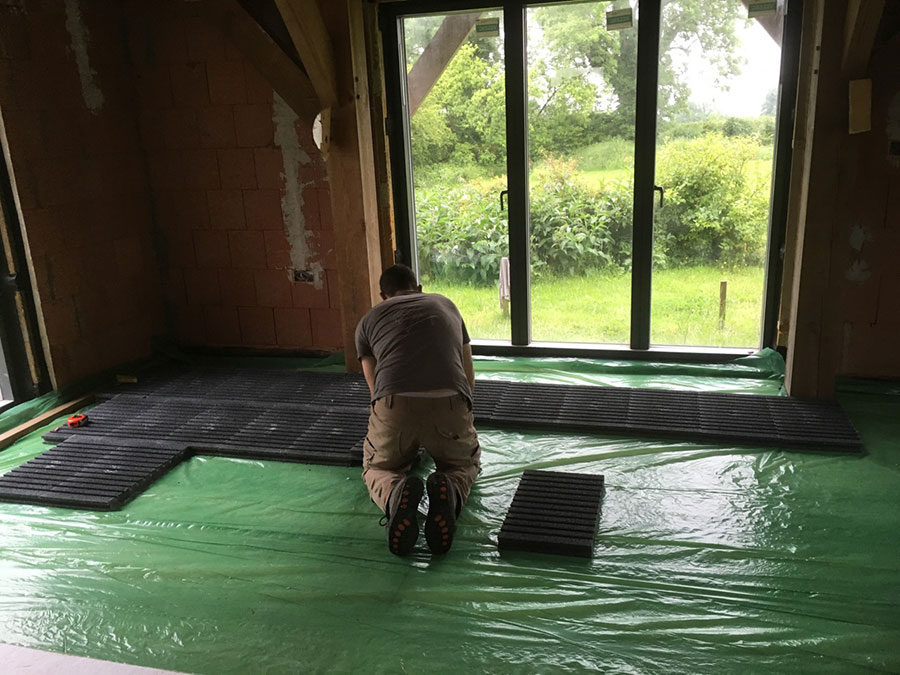 Always lots of fun working with Mike and Mike: 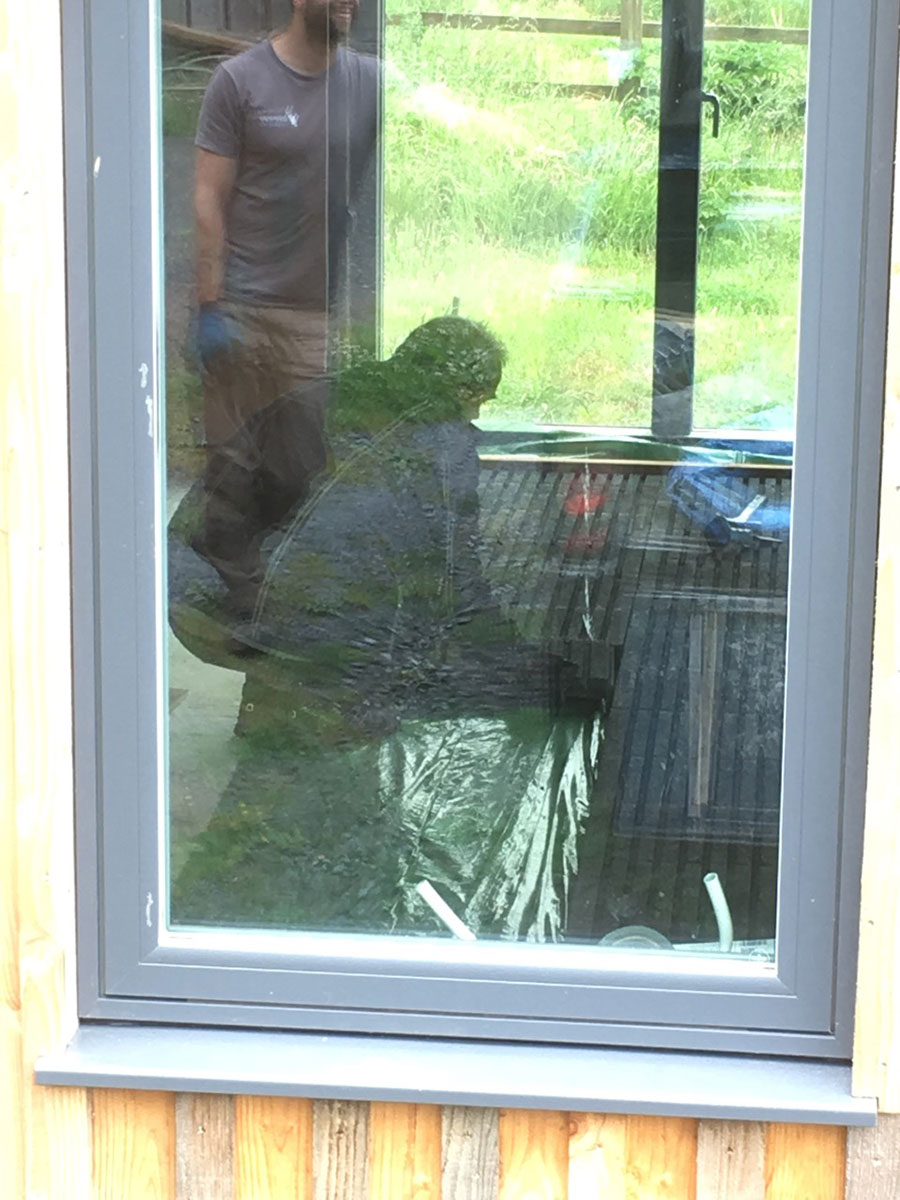 First tonne of tiles shifted rather alarmingly in my rear view mirror while I was driving. (Mike has an incriminating video that does include a bit of screaming…). So for trip 2 which I did ON MY OWN I put a few supports and straps in place. I took this photo when I was fresh back from that drive on my own. No screaming at all. Yeah, yeah, no proof because no recording… 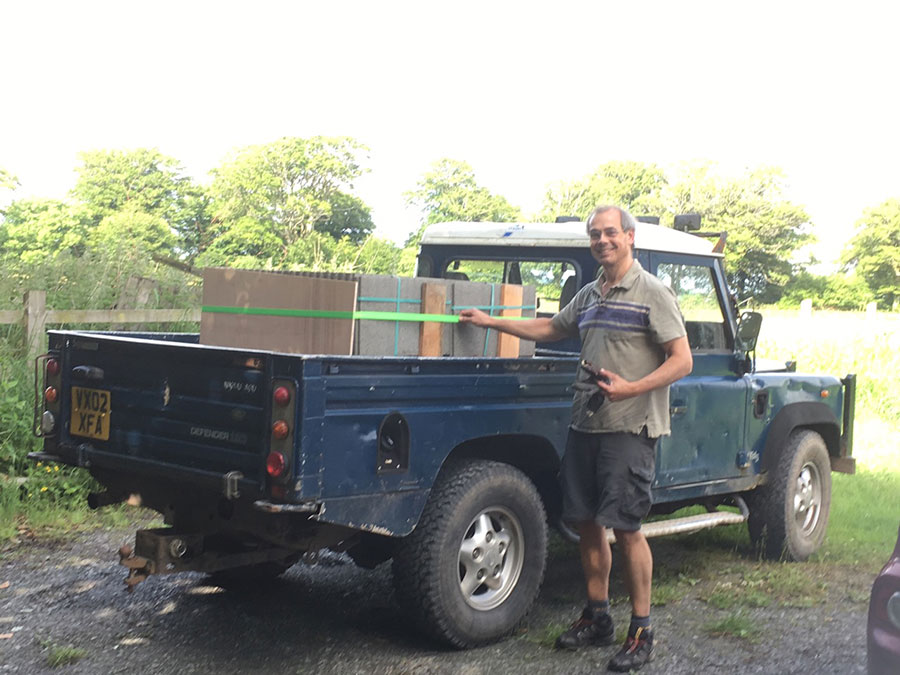 Tiles are VERY easy. Mike did the cuts with a small angle grinder, followed by a tap with a bolster chisel. No Failures! Total waste was approximately 3 tiles worth! 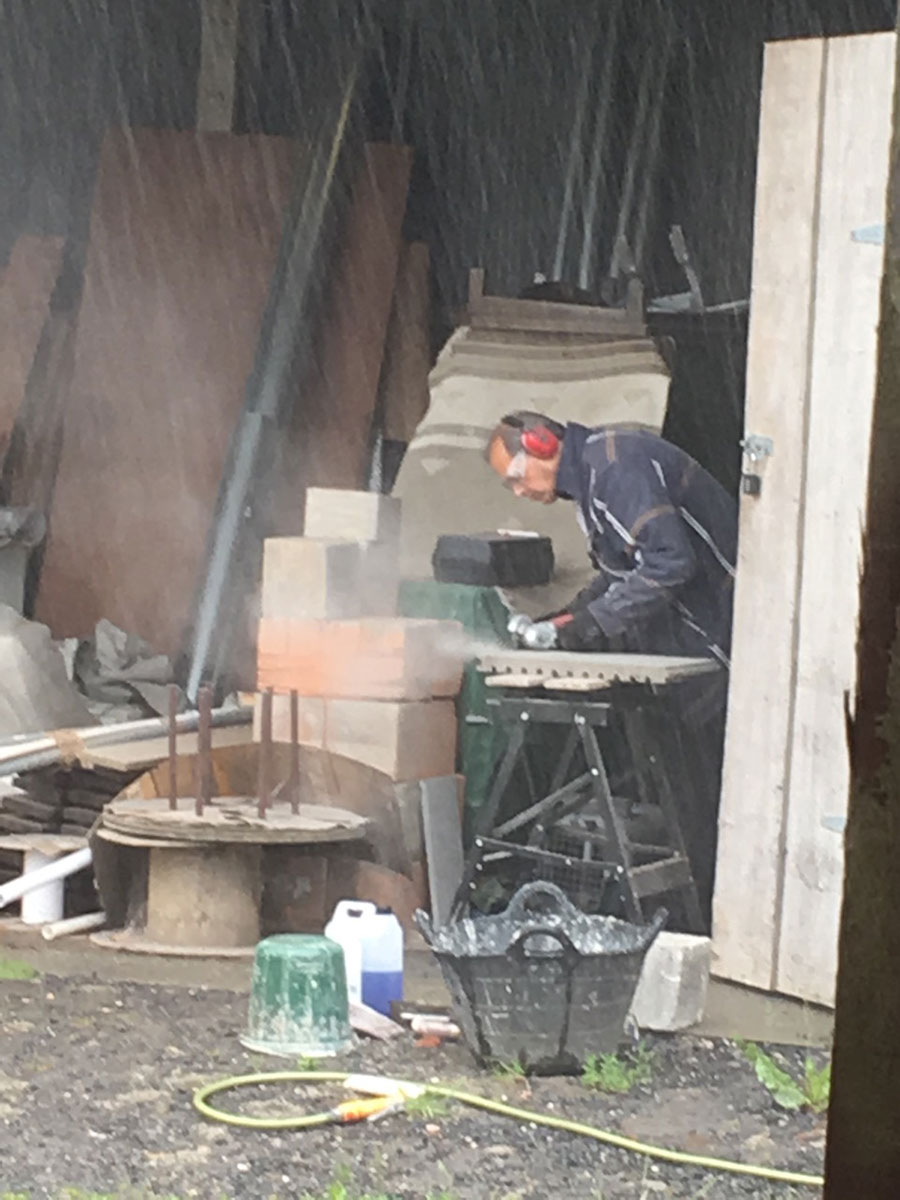 And very quickly, it was done! 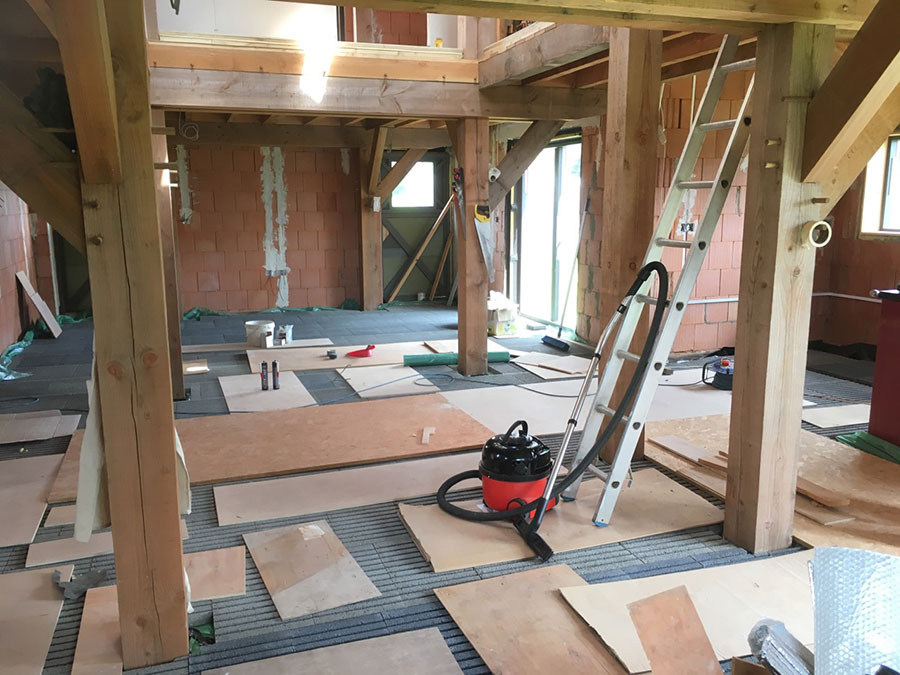 Because I had accidentally spoken to Chris Brookman very early on, I’d discovered that he reads peoples’ house plans thoroughly. He imports leading edge eco materials for house building but doesn’t expect people to just ‘know’ how to use them. He took it upon himself to educate us. He gave us confidence that we could install these tiles with ease. He advised on the insulation layers below the Lithotherm and made sure his system would connect to the complex of heating systems at Easterdown.

Some of the insulation materials he advised weren’t products that he supplies, not because he didn’t have a substitute, but because Chris Brookman cares deeply about building great, well insulated passiv and near passiv houses. So even before we  started buying his products, he’d already showed himself to be a man of great integrity.

But before that, The Lost Year

Choosing leading edge materials and design is not without risk and in April 2015 we entered what I now think back on as ‘The Lost Year’.

Just around the time our pellet boiler went in we began to suspect that something wasn’t right.  Mike Hope of Roderick James Architects had said right at the beginning- if or when you fear that ‘it has all gone terribly wrong’, ring us.

So, what went wrong?

People who have read this blog will have noticed that the blog entries came thick and fast between June 2014 and March 2015, then slowed to nearly a standstill. We had been building up the floors (finally!) in order to install Ruby, the pellet boiler/cooker.  I had consulted with Chris Brookman regarding which type of insulation to use under his Lithotherm tiles, so that last April, 2015, he knew that his tiles were next thing to install.  But it was around then, when the roof was on and the doors and windows were in that we began to see rain water coming in where it shouldn’t have. And it turns out that there were some pretty major problems with how the doors and windows were sitting in and on our Porotherm blocks.

As I said earlier, just beyond the leading edge is an abyss of ignorance. The Porotherm block distributors had given us conflicting information about how to create and treat the openings in the blocks. The window manufacturers didn’t have an established installation detail into Porotherm block if you use wooden cladding.

There were various small mistakes and miscommunications that had occurred, and very importantly, the window manufacturers OK’d a drawing with a glaring mistake in it and this was released to us in the final set. Mike Roberts, our wonderful Carpenter/Builder/Project Manager saw it but didn’t want to bother us with this – he believed that he would figure out a way to make everything work despite the fact that this drawing was wrong. But he didn’t know back then that he never stood a chance to work this out on his own, because it wasn’t the only issue. The block manufacturers’ and window manufacturers’ instructions were incomplete, badly translated and in some cases, non-existant. Their customer service departments avoid answering the phone and when they do you are speaking to an unpaid, untrained ‘intern’.

I wish now that I had started sooner to try and find out details of the what and why, when things started to noticeably slow down. In retrospect, I could and should have listened harder to my feelings. But now all of us together with Roderick James Architects needed to sit down and work out how to get everything back on track.

So what went right?

There was a point in time where we were advised to have everything pulled out and put back in again.  Thank goodness, this did not need to happen. Roderick James Architects gave me a hotline to people they knew within Velfac (windows and doors) and that is when we started to get solutions to our problems. I was told that there was another option, that there were special tapes that could be fitted to provide the missing air and water tightness.

Because Chris Brookman had always been so helpful I felt compelled to lower his expectations. By then I had already told him that he should expect the Lithotherm order that week. We had to stop, we had to find out what we do next and I didn’t want Chris to think we’d changed our minds, so nearly straight away I rang to say that there was going to be a delay in ordering the Lithotherm. And that’s when Chris Brookman went from mere mild mannered, helpful everyday guy to superhero in our estimation.

When I told Chris that we needed to stop and install these tapes to solve the problems, he told me that he supplies a range of these tapes, which I had never realised. And when I told him that I had been struggling to understand how to read the manufacturer’s details on the tape installation, he talked me through it over the phone. When I told him that this competitor’s products didn’t include a drawn detail of how to use their products at door corners, he emailed me a drawn detail of how to use his products at door corners. The monumental difference between his help and the supposed ‘customer support’ of the big importers/distributors of eco materials was not lost on me at all.

AND when we had our big meeting at Roderick James Architects – all of the best brains in the project working out a strategy that we all felt happy with, Chris Brookman came along with tapes, drawings and demonstrated how to make them into a water tight corner for us! Please remember that at this point Easterdown hadn’t bought any of his products. Wow! Talk about service and dedication above and beyond!

Thus, we had our solution. Lessons learned? If you are lucky enough to have the privilege to embark on such a project as this, you had better be sure you have a great team of committed, genius people around you. Only the Alpha League with added super-hero will do when you are perched on the leading edge, staring into the abyss of ignorance. Grateful thanks to you, Chris Brookman, for being that hero.

So, Why Didn’t we end up in a dispute?

Dispute is not something I am afraid of and ‘Confrontational’ is probably my middle name. But there are two big reasons why ‘ANGRY’ wasn’t the solution to this problem. Firstly, unless someone clearly demonstrates that they intend to completely abdicate their responsibility and their honesty, then the blame-game is a huge waste of time and emotion.

And second, I have learned through embarrassing/humiliating past experience that it is counter-productive to bite the people who are trying to help you. No matter how much they see or understand the pain you are in, it could cost you the help you desire and the regard/respect of your colleagues. Who wants to pick up the phone to a screaming harpy? And in this situation you really need people to pick up the phone when you call.

To move from disappointment straight through to problem-solving without ‘getting angry’ in between is extremely useful and provides instant relief from your sadness and fear. Not only does problem-solving distract you from feeling bad, it actually solves the problem. Win-win.